THE DAY REPLAYED – Germany are the second team to advance to the quarter-finals of the FIFA U-20 Women’s World Cup France 2018 after earning a second win in Group D on Thursday. Their victory over China PR, coupled with Nigeria’s win over Haiti, saw them join the Netherlands in the next stage of the competition. For the Caribbean side, defeat by the West Africans meant their inaugural tournament campaign will end in the group stage.

In Group C, Spain took a step closer to a last-eight spot with a slim win over Japan, while USA bounced back from an opening defeat to hammer six goals past Paraguay, with Sophia Smithone of three Stars and Stripes players on the scoresheet against the South Americans.

Ajibade on the mark
With her match-winning penalty against Haiti in Saint-Malo, Nigeria striker Rasheedat Ajibade finally found the scoresheet at a U-20 Women’s World Cup, having drawn a blank in three appearances at Papua New Guinea 2016. As the top scorer in the African qualifiers for that tournament and France 2018, the 18-year-old will hope her spot-kick at the Stade de Marville can propel her and the Super Falconets towards the knockout stages of this competition.

Have we been here before?
Spain’s 1-0 victory over Japan had a sense of déjà vu about it, as this was the same result when the teams met in their second match of the group stage at Papua New Guinea 2016. Even Carmen Menayo, who was La Rojita’s goalscorer in Concarneau, played in that very match at Bava Park in Port Moresby less than two years ago.

Looking efficient
While some teams have shown real style in claiming victories at France 2018 so far, Germany’s passage to the last eight has been done with their typical efficiency, even if it has not been the most dazzling pair of displays. The three-time champions found the goals they needed in the first half against China PR to ensure that three more points were coming their way after opening their France 2018 account with a 1-0 win over Nigeria on Monday. It also maintained their unbeaten record against the Asian side in this competition, with the Germans having claimed three wins and a draw all-time. 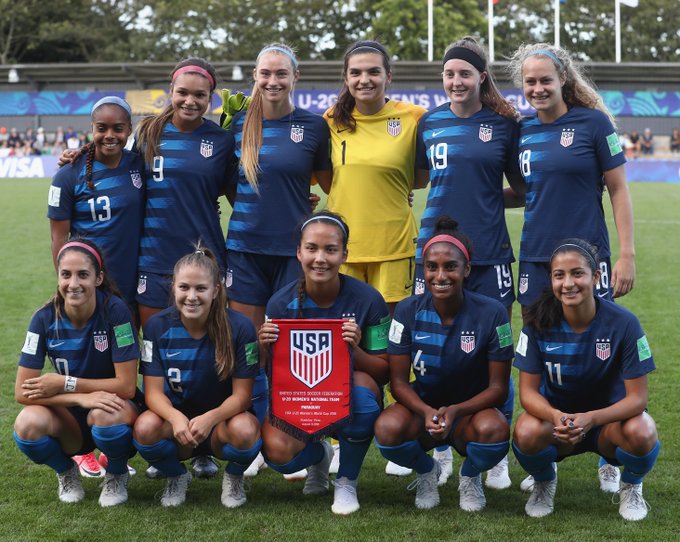 The words
“I am satisfied with how we worked defensively. It was not easy for us to assert ourselves individually, so we definitely have to improve. Especially in the first half, we did not find our attacking game, but we scored two goals from the two occasions we had, which remains a positive memory.”
Germany coach Maren Meinert