Over 20 million participated in qualifying. Thirty-two made it to the Grand Final. One lifted the FIFA eWorld Cup trophy. Mosaad ‘Msdossary’ Aldossary was proclaimed the EA Sports FIFA 18 World Champion after a 4-0 win on aggregate over Stefano ‘StefanoPinna’ Pinna at The O2 in London.

‘Msdossary’ looked in firm control throughout the final in front of a watching crowd at the iconic London arena, while many more around the globe watched the action unfold via live streams in four different languages.

Formidable four do battle
The day kicked off with a mouthwatering clash on Xbox. ‘Msdossary’ and Kurt ‘kurt0411’ Fenech locked horns in the first semi-final, both carrying significant momentum after impressive quarter-final wins against Michael ‘Megabit’ Bittner and Spencer ‘Gorilla’ Ealing respectively. It was ‘Msdossary’ who ran out victorious, setting the tone by booking his final place in emphatic fashion with a 8-3 aggregate victory.

On PlayStation, Marcus ‘Marcuzo’ Jorgensen went into the semi-finals with plenty of confidence having pulled off one of the shocks of the tournament the previous day. The Dane had defeated top seed Nicolas ‘nicolas99fc’ Villalba in the quarter-finals to advance to the final four in stunning fashion. However, the PlayStation crown ultimately belonged to Stefano ‘StefanoPinna’ Pinna. After losing the first leg 2-1, the Belgian showed tremendous character to battle back to win 4-3 after a thrilling second leg that went to extra-time. 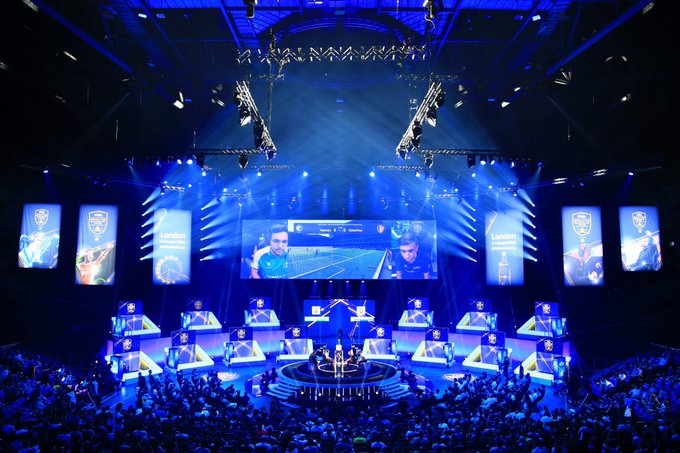 FIFA 19 sneak peek
Ahead of the Grand Final, fans at The O2 got a sneak peak of FIFA 19 and the new features it will have before its official release next month. eSports expert and Grand Final host ChuBoi was first on the controller, highlighting new activations such as division rivals, player picks, dynamic tactics, as well as the icons included on the new edition. Those who turned out at the iconic London venue also took in a celebrity FIFA tournament which featured England’s women internationals Jordan Nobbs and Leah Williamson, as well as Reading’s David Meyler and singer-songwriter Zak Abel.

Final Showdown
Both finalists re-entered the arena to a warm reception as they took centre stage to battle for the $250,000 USD prize and the new trophy. ‘Msdossary’ looked strong and composed from the off. After the Xbox titan won 2-0 on the preferred PlayStation console of opponent ‘StefanoPinna’ in the first leg, the Saudi Arabian possessed a huge advantage going into the second match.

The FUT Champions Cup winner, looking comfortable throughout, held firm to record another 2-0 victory to cap off a resounding victory and get his hands on the trophy. With the support of his family by the side of the stage, ‘Msdossary’ spoke of his pride of being able to represent his country on the global stage.

What they said
‘Msdossary’: “I’ve made my country proud by bringing home the trophy. This is my second event in the UK and it’s my second win, so I think this is my second home. I’m strong on both consoles and I defended very well on both games. I deserved to get two clean sheets in both legs.

“I haven’t decided what to do with the $250,000 USD. My aim every year is to win more trophies. Last year I got one and this year I’ve got two. It’s an honour to be the first winner of the new trophy. Hopefully I can keep getting better and better.”

‘StefanoPinna’: “It was a difficult game for me, especially on the Xbox side. On the PlayStation tie, I didn’t score my chances and he did. I couldn’t play with my usual style because of the pressure he was putting on and his defence is amazing. I want to thank all my fans for supporting me. I couldn’t go all the way but I’m proud of myself. ‘Msdossary’ is a deserved winner and congratulations to him.”

The stat
2 – ‘Msdossary’ is the second Saudi Arabian winner of the tournament. His compatriot Abdulaziz Alshehri won the 2015 edition of the competition, then known as the FIFA Interactive World Cup (FIWC).